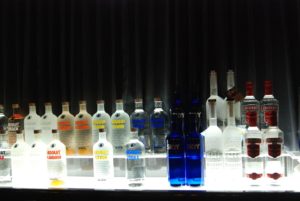 There is some argument as to where vodka originated – both Poland and Russia claim it as their own, but the majority of historical references are in favour of Russia and indeed, if the mention of vodka comes up in conversation, it is usually associated with the likes of Russian producers, such as the Smirnoff family.

Vodka is mentioned as a distilled spirit way back in the 4th century and mainly credited to eastern and northern Europe. It took many years for it to become popular in other parts of Europe and the USA, probably not until around the early to mid-1900’s. However, the meteoric rise of vodka only took place from the late 1940’s, and by the early 1960’s, it had ‘elbowed’ gin out of the top spot of most-consumed spirits. The popularity of whisky also declined in favour of vodka in the early 1970’s.

Vodka’s popularity is purportedly due to its ability to combine with almost any fruit, and mixers such as tonic water, bitter lemon and coca cola. With little or no aroma unless flavoured, this was another factor of its popularity.

So how is this colourless, odourless spirit produced? Due to its neutrality, the production of vodka can be achieved, put crudely, by the distillation of almost any ingredients that can be fermented, such as potatoes or corn. However, high quality grades tend to use grains in these modern times, which are distilled with water and active enzymes such as maltose and dextrose to convert them into alcohol. Many vodkas are extremely high proof when first distilled, and more water will be added to prevent the proof content being outrageously high.

Once more modern techniques became apparent and vodka increased in popularity, it was only natural that experimentation with other flavours would occur, mainly towards the late 1900’s. Fruit became popular, as did herbs, spices and even a range of grasses were added after distillation to further enhance vodka-drinkers tastebuds. The USA became a recognised nation for vodka production and have a huge export business throughout the world.

Russia, Poland and the Ukraine are considered to be the highest consumers of vodka in the world according to online researchers, Euromonitor, with the UK and USA languishing way behind on per capita consumption. Vodka became the spirit of choice for women in particular, with some companies actually targeting this market, by producing vodka in pretty packages, akin to perfume containers!

Part of the attraction to vodka comes from its colourless and odourless allure and remains popular in cocktails as well as long drinks.

We have some great Vodka based fruit liqueur recipes here…

We use cookies to ensure that we give you the best experience on our website. If you continue to use this site we will assume that you are happy with it.Ok